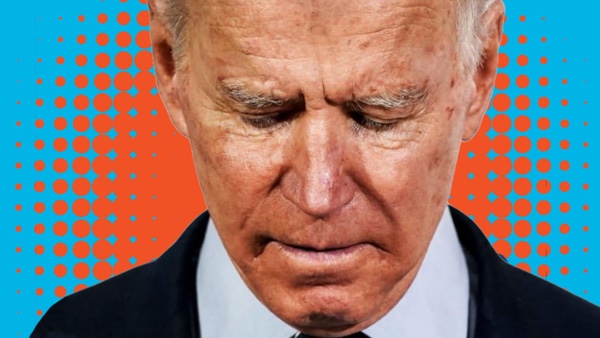 In the weeks leading up to Afghanistan’s fall to the Taliban, President Joe Biden and Afghan President Ashraf Ghani – who has since run away from his country and his people like a little girl running away from a spider – made a secret back room deal to deceive the entire world about how strong the Taliban threat was as that time.

According to the transcript of the last phone call between the two, it reveals how Biden asked the Afghan leader to downplay the likely resurgence of the Taliban. He asked him to lie about what Ghani perceived would be a slaughter against his people. What gall Biden has.

“President Joe Biden wanted the now-departed Afghan president to create the ‘perception’ that his government was capable of holding off the Taliban – an indication he knew it was only a matter of time before the US ally fell to the Islamic group even while reassuring Americans at home that it would not happen,” the Daily Mail reported about the damning transcript.

While Democrats made things up about another transcript of a phone call between former President Donald Trump and Ukraine, President Volodymyr Zelensky, I am shocked and stunned that the Biden-Ghani transcript hasn’t already been “misplaced” by Democrat operatives. [wink]

I’m already certain that this transcript will capture no interest at all her royal majesty House Speaker Nancy Pelosi.

“In the last phone call between Biden and his Afghan then-counterpart Ashraf Ghani, the American president said they needed to change perceptions of the Taliban’s rapid advance ‘whether it is true or not,’ according to excerpts published on Tuesday,” the report continued.

“Four weeks before Kabul collapsed, Ghani pleaded for more air support and money for soldiers who had not had a pay rise in a decade,” the report added.

The transcript was originally obtained and released by Reuters.

President Biden said to President Ghani that he had to help change the perception of how things were going with the Taliban advancing.

“Hey look, I want to make it clear that I am not a military man any more than you are, but I have been meeting with our Pentagon folks, and our national security people, as you have with ours and yours, and as you know and I need not tell you the perception around the world and in parts of Afghanistan, I believe, is that things aren’t going well in terms of the fight against the Taliban.”

“And there’s a need, whether it is true or not, there is a need to project a different picture,” Biden added.

When Ghani ran away, according to the Russian embassy, he got into a helicopter with a lot of cash. Ghani was accused by an Aghan diplomat of stealing $169 million from the Afghan people. Though Ghani denied taking the money, the Taliban is demanding he return the alleged stolen money.

A Taliban spokesperson said, “He made a mistake of abandoning the government… This is what resulted in the sudden vacuum, plundering and shooting.”

Here are the concerns the Afghan president had that Biden pretty much didn’t give a rat’s rump about.

Mr. President, we are facing a full-scale invasion, composed of Taliban, full Pakistani planning and logistical support, and at least 10-15,000 international terrorists, predominantly Pakistanis thrown into this, so that dimension needs to be taken account of.

Second, what is crucial is, close air support, and if I could make a request, you have been very generous, if your assistance, particularly to our air force be front loaded, because what we need at this moment, there was a very heavily reliance on air power, and we have prioritized that if it could be at all front-loaded, we will greatly appreciate it.

And third, regarding procedure for the rest of the assistance, for instance, military pay is not increased for over a decade. We need to make some gestures to rally everybody together so if you could assign the national security advisor or the Pentagon, anyone you wish to work with us on the details, so our expectations particularly regarding your close air support. There are agreements with the Taliban that we [or “you” this is unclear] are not previously aware of, and because of your air force was extremely cautious in attacking them.

Did you get that? Ghani advised Biden that besides Taliban fighters, his intelligence told him at least 10-15,000 “international terrorists” were descending upon Afghanistan, with Pakistani planning and logistical support. I don’t remember Biden saying any of that in any speech. In fact, I remember him telling a reporter that the Taliban were nowhere near the capabilities of the Vietcong when a comparison was made to the fall of Saigon.

Now we know why Biden was hellbent on getting our military out as soon as possible. He knew in advance that there was going to be a huge terrorist army coming, and he wanted to run just like Ghani did. Joe Biden knew an American ally, Afghanistan, was about to be defeated and he had the capability of stopping it and protecting an ally, and instead he ran away. This is cowardice and Biden’s decisions put our troops, our American citizens still there, and our Afghan allies in grave danger and he asked the Afghan president to lie about it.

Ghani ran away because he told Biden what was coming and the American president not only didn’t offer to help but asked the man to lie about it to the world. This is incredible.

On Tuesday, after Joe Biden disgracefully left hundreds, possibly thousands, of Americans behind enemy lines, Jake Sullivan, the Biden administration’s National Security Adviser, implied that economic aid in the form of Afghan government funds that were frozen by the US government, could be used to bribe the Taliban to see that the Americans were able to get out of Afghanistan. The Biden administration was banking the lives of American citizens on the greed of Taliban terrorists to ensure their safety.

“It’s going to be up to them,” Sullivan added. “And we will wait and see by their actions how we end up responding in terms of the economic and development assistance.”

So, the Biden administration was waiting around to see if the Taliban go after the dangling carrot of Afghan frozen assets and if not, oh well, we tried?

And don’t think for a minute that the Biden administration is the one holding the cards over the Taliban.

“The Taliban have offered Joe Biden a deal: unfreeze the Afghan funds and they will extend the deadline,” former acting Director of National Intelligence Richard Grenell posted on Twitter.

The Taliban have offered Joe Biden a deal: unfreeze the Afghan funds and they will extend the deadline.

The Taliban told the Biden administration to “unfreeze” the assets, estimated to be $65 billion, and it might consider extending the deadline. What is it with Democrats and paying off terrorists?

No quid pro quo was ever proven from the Trump transcript of the call with Ukraine’s Zelesnky and the Democrats impeached him anyway with a whistleblower who lied about his identity. Remember, Lt. Col. Alexander Vindman admitted that he lied about certain parts of the phone call. None of it mattered, because the Democrats were using the impeachment to get rid of Trump and things like truth and honesty never matters to them.

The transcript of Biden and Ghani is damning because it presents a clear cut case of Biden wanting to lie to the American people and the international community by getting the president of Afghanistan to lie about the threat that the Taliban posed. What makes this damning evidence more potent is the fact that Biden’s withdrawal from Afghanistan an unmitigated disaster that resulted in the deaths of at least 13 members of US military. The ISIS-K bombing just outside the Kabul airport would never have happened had Joe Biden not turned down having the American military handle security and handing that function over to the Taliban instead.

The post OMG! Biden Just Got Caught Lying And Now It All Makes Sense appeared first on The Beltway Report.