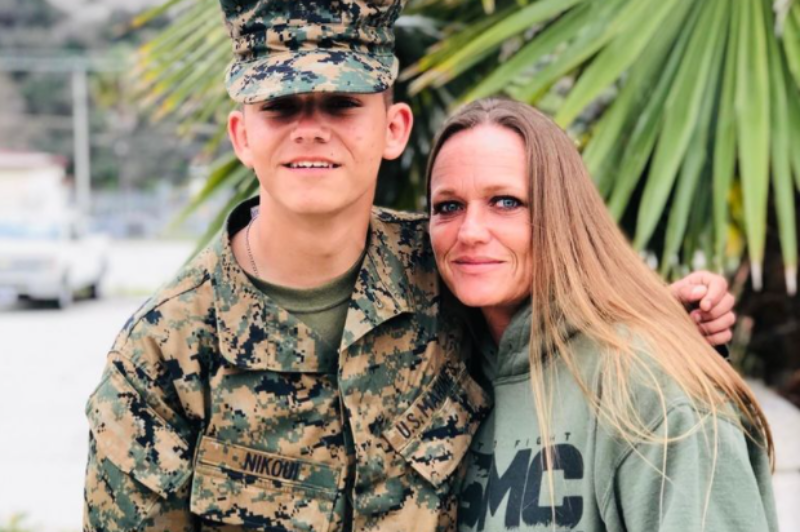 By now you all are familiar with Biden’s mistreatment of Gold Star parents. Especially those who lost their children during the Kabul airport bombing in Afghanistan two weeks ago. Biden was criticized for checking his watch while the bodies of the 13 fallen service members were being unloaded from the plane to make their final journey home.

You may also be familiar with Shana Chappell — the Gold Star mom who alleged President Joe Biden “rolled” his “f***ing eyes” when she confronted him at the dignified transfer of her son, Marine Corps Lance Cpl. Kareem M. Nikoui.

Donald Trump previously sent a message to the grieving mother to offer her condolences and love. Chappell responded back with a heartfelt invite to Trump that she shared on Facebook:

“Thank you President Trump for your beautiful response to me. I would love if some how my President ( you Mr. Trump) could be present as i lay my Beautiful baby boy Lance Cpl. Kareem Nikoui to rest. It would be such an honor to meet the real President of the United States of America,President Trump. I love you and America loves you. Although Instagram has given me back my account, i am shadow banned so i am gonna need you all to share this for me in hopes it Gets to our President Trump.”

Adding, “thank you all so much for honoring my son Kareem Nikoui ,thank you all for your love and support. Thank you all for using your words and your accounts to get me my account back. Much love to you all! Stay strong! Now is the time we fight back and we don’t stop until we have our country back on her feet! Be #lionsnotsheep #america #landofthefree #homeofthebrave i am watching what i post and say that way i don’t lose my account again or get censored. I will be doing interviews soon but right now I’m to hurt and angry to do them”

The media has mostly ignored Chappell after she expressed herself to the man who needlessly put her son in harm’s way which resulted in his senseless murder. While scrolling over the brokenhearted mom’s Facebook and watching her beautiful tribute videos to her brave boy I couldn’t help but to feel disgusted with social justice warriors. Where is the outrage these families?

Then I came across a post where Chappell expressed the exact same disgust. Chappell wrote:

“I have a question?! How is it a criminal on drugs that died while being taken into custody , managed to stir up people to the point they were rioting, looting, burning down buildings, doing other criminal crap plus protesting and it was constantly on the news because people were demanding Justice but 13 U.S. service members are killed in Kabul saving lives and all i hear is crickets???? Where’s their justice???? They didn’t have to die!!!!! My son didn’t have to die!!!”

She went on to say, “these brave men and women were saving lives and lost their lives in return!!! These 13 beautiful human beings are why we fly our flags!!! They were fighting for something so why aren’t all of you???? The blood of all 13 Heroes is on B!d3ns hands!!! Do not let their deaths be for nothing! It is time to rise up and make the changes our country needs! It is up to we the people to rise up together and stand strong!!! I have to watch what i say because of course I’m still being censored so i don’t even know if this post will be seen! My heart is destroyed! This pain is unbearable! @joebiden remember who i am!!!!!

“Kareemy, you are my heart, my courage and my strength. Guide me into the right direction! I love you more than all the stars in the sky!” the mom wrote.

Chappell first made news after she shared her horrific exchange with Biden who reported rolled his eyes at her and turned his back to her before throwing up her hands. She shared her encounter with Biden on Facebook but that post was ‘mistakenly’ removed by Facebook censor goons.

“My son was one of the marines that died,” she told Wilkow last Saturday. “Twenty years and 6-months-old, getting ready to go home from freaking Jordan to be home with his wife to watch the birth of his son, and that feckless, dementia-ridden piece of c**p just sent my son to die.”

After hearing Chappell’s story, Trump responded to her publicly showing her the empathy and respect that she deserves.

“If I were President, your wonderful and beautiful son Kareem would be with you now, and so would the sons and daughters of others, including all of those who died in the vicious Kabul airport attack.

“Civilians should have been brought out first, along with our $85 billion of equipment, with the Military coming out very safely after all was clear.

Trump reportedly called the families of all the fallen service members, as a president should. I could not find where Biden called anyone personally. Seems he’s only around when there are cameras to see it.

The post Gold Star Mom Berated By Biden Gets The Last Laugh With Invite To ‘Real President’ Trump appeared first on The Beltway Report.