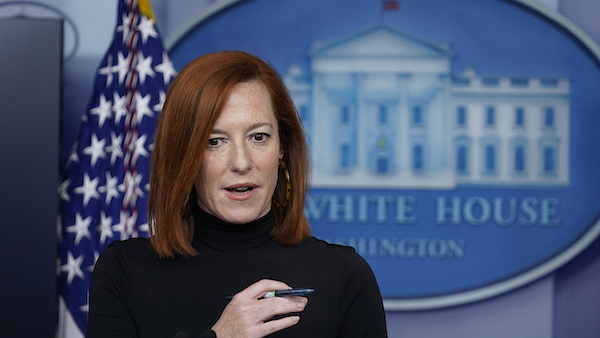 On Monday, during a press briefing, White House mouthpiece Jen Psaki, who has never uttered a word that would force the listener to go run for a dictionary, made the absurd claim that it would be “unfair and absurd” for companies to raise costs on consumers in response to the Biden administration raising the corporate tax rate.

Folks, she is the White House Press Secretary, and she doesn’t know that corporations pass the costs of government onto the consumers. I am fairly certain that her politics are to the left of Lenin. In fact, I have to question on a scale of 1 to Crazy, how many cats does Jen Psaki own? She is at one with the Looney Left who always chant that corporations don’t pay taxes. Conservatives say that too, but at least they know that though corporations do pay their taxes, they get the money by either increasing the cost of their goods or services, or they cut back on the costs of producing their goods and services or they cut the workforce. This is not hard to understand for normal people.

Psaki made the incredibly naïve remarks during the following dialogue with a reporter:

WH Reporter: I want to ask you about what Republicans are pointing to in the analysis from the Joint Committee on Taxation. They say, according to — if I’ve read the chart correctly, more than 16 percent of taxpayers would see their taxes increase under the bill that’s approved by the House Ways and Means Committee. Will the President sign that bill if — as if — it is coming out of that committee? Or will he insist on the changes so that he will maintain his commitment that taxes won’t go up on people making $400,000 a year?

Jen Psaki: I have not looked at the document or the report that you have put out. Obviously, the President — or that you have referenced, I should say — that the Republicans put out.

Obviously, the President’s commitment remains not raising taxes for anyone making less than $400,000 a year. There are some — and I’m not sure if this is the case in this report — who argue that, in the past, companies have passed on these costs to consumers. I’m not sure if that’s the argument being made in this report. We feel that that’s unfair and absurd, and the American people would not stand for that.

Jen Psaki: It’s “unfair and absurd” that companies would increase costs for consumers in response to us taxing them more.

Forbes pointed out that it was “important to remember that corporate taxes must be paid by people.”

Depending on the company’s situation, they will take the actions necessary for the company to survive its own government.

You actually need a special, pressure-resistant diving suit to reach these depths of stupidity. Jen Psaki should have access to all the economic advisors who work for the Biden administration. Shouldn’t she have brushed up on the topic since Joe Biden wants the Democrats controlling the Congress to increase taxes on corporations? I can’t imagine being a journalist having to listen to Psaki speak every day. I’d rather suck farts out of dead seagulls than to go through that every day.

Folks, the administration says no one who makes less than $400,000 will have their taxes increased, even though we ran a story pointing out that married couples who file jointly and both spouses earn less than $400,000 a year could go over the allotted amount in the tax law when their incomes are combined and they would be susceptible to Biden’s tax increase. All Americans who make less than $400,000 will most certainly pay extra by having the costs of the Biden tax hike burdens passed onto them in one way or another because any way you look at it, the American consumer is always harmed in the end and it’s not the fault of the corporations; it’s the government.

The post OMG: Jen Psaki Proves She Knows Nothing About Economics At All [Video] appeared first on The Beltway Report.