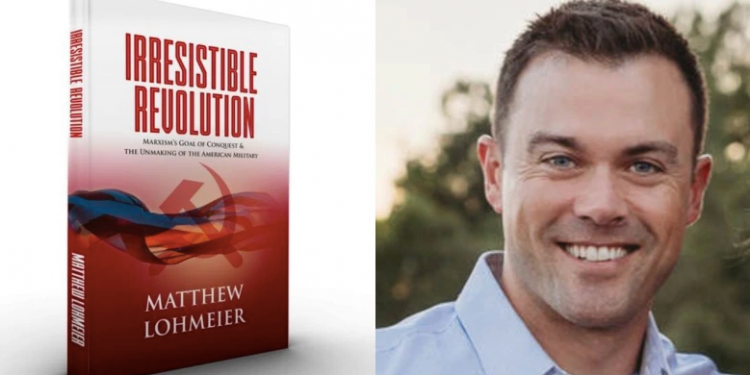 News went viral last week about the removal of a high-level and well-qualified member of the US Air Force over his appearance on a podcast talking about his personal beliefs that the country is in a Marxist Revolution, and that includes the US Military. Today the same man exposed a new military directive of purging people from the military called “Patriot Extremism”.

“Patriotism will get people to stop a Marxist Revolution, so that is why they fight Patriotism,” Matthew Lohmeier told Steve Bannon on Thursday.

“Good people may be unwittingly buying into a revolutionary movement that is intent on overthrowing the US Government,” Lohmer, a former USAF Officer at United States Air Force, who was relieved of duty last Friday for talking about the Marxist takeover of the US military.

Lohmeier was interviewed on Bannon’s War Room Podcast about his book, which he removed from duty over:

“IRRESISTIBLE REVOLUTION Marxism’s Goal of Conquest & the Unmaking of the American Military” which is the foundation for his removal for office.

Bannon set the interview up by introducing the fact that Lohmeier, until last Friday, was viewed as a superior Air Force candidate. Bannon made the point telling his audience:

“The Air Force saw him as a leader in a very unique position, in the highest councils in the security of the nation, based on how he was promoted and by his fitness reports.  The record is very clear the military is competitive, and when you see people like Lohmer people know he was performing at the top 1%, with intelligence, grit character, and performance, meaning when they are called to do so, they perform. ”

Lohmeier read a Military prepared disclaimer about his book, which he said was printed in three places in the actual book he was removed from duty over, that read: “the views expressed are those of the author and not those of Space Force”.

“When I was called in and relieved of duty for the cause last Friday, the allegation was that I was political in my official capacity, and I  have not been.  I have pointed out that many have been, but I have not been.  I pointed people to chapters 5 and 6 of my book, Lohmeier said.

Talking about the left’s attack on him and his work, he said,” I liked seeing the one-star review on Amazon; I like to see what they have said- but they don’t say much of anything.  They are ideological possessed humans. In their negative feedback, is just one-liners like Kill yourself, and you are a racist,” he said describing the cancel culture of the left.

“But I am writing about Critical Race Theory, which is rooted in Marxism, and it is polarizing American society right now.  It is fundamental to transform the military,” Lohmeier said.

Lohmer spoke perfectly about the lineage of thought from a free country into what we see now, a Marxist-dominated society, where victimhood is elevated into a guerilla war tactic against the American people and America’s institutions.

“We have a climate of fear, and people make rash decisions in a climate of fear.  People are afraid of voting their concerns. I get emails from others who say they have voiced concerns saying they have used their chain of command and nothing is changing.  What is fundamentalist in a transformation is military members can not be patriotic. They are creating a new level of extremism that is called Patriot extremism,” Lohmeier said.

“That is teaching them the country they live in is not worth defending,” he told Bannon.

The post Soldier Blows The Whistle On Purge Of Patriots From Military In Bombshell New Book appeared first on The Beltway Report.